Outreach to organizations representing civil society often focuses on issues of cultural identity, human rights, and development. CAS works to foster partnerships between OSU faculty, students and staff with civic groups and community organizations which work on these issues as they relate to Africa itself, as well as to the Diaspora resident in Central Ohio. Some examples include:

* Partnership with the Yoruba Club 21, a Columbus-based socio-cultural group for people of Yoruba descent from Nigeria, has generated funds and events focused on Yoruba language and culture at OSU and in the community. These efforts complement the Oyekan Owomoyela Yoruba Studies fund endowment. 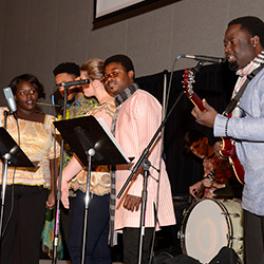 * Outreach to Columbus's Somali community, the second largest in North America. Somali cultural and academic events hosted on campus, including writers Nurrudin Farah and Ali Jimale Ahmed, Poet Gaariye, photojournalist Abdi Robles, and humanitarian heroine Dr. Hawa Abdi, draw many participants, both Somali and non-Somali, from the community. The Center for African Studies assists OSU students who wish to conduct research or participate in service-learning to connect with appropriate Somali non-profit organizations. CAS has co-hosted many conferences and presentations with different Somali civic groups, centered on themes of statehood, human security, immigration, humanitarian response, US and other foreign policy, language, health, education, and other issues. In 2007, the 10th Triennial Somali Studies Conference on the OSU campus brought community and civic organizations together with over 200 academicians and other professionals for three days of sessions. CAS's development of the Somali Studies for Educators website stemmed from collaboration with a variety of Somali community groups.

* Book drives for community groups from Sierra Leone and Guinea have collected hundreds of volumes for local libraries in those two countries.

* CAS participates in community festivals and events, such as annual Ethiopian New Year's and Somali Graduation, as well as seminal events such as celebration of Ghanaian and other independence days. Performing and visual arts events supported by CAS include the Azaguno Dance troupe, SDASA South African Choir, the Chapungu exhibit of Shona art and others.

* Partnering with community groups to create greater awareness of humanitarian issues in Africa, particularly to provide context beyond that of mainstream media coverage of the continent's disasters. CAS has participated in the screenings of such films as Hotel Rwanda, Lost Boys of Sudan, The Letter (Somalia), and Invisible Children (Northern Uganda) shown in local theaters and followed by community discussion. Fora such as Voices from Darfur , organized by the Central Ohio Darfur Solidarity Network, and a discussion of the social media phenomenon of Kony 2012, also received support from CAS.